In 2020, I wrote a post about my IMDb ratings of all episodes of Frasier. Since then, my great friend Knud rewatched the show and also rated all episodes on IMDb. When we both watched Seinfeld back in 2017, I compared our ratings and identified some trends and similarities in our ratings. For that reason, I found it relevant to compare our ratings of Frasier as well.

There are 264 episodes of Frasier. This is more than 100 hours of content. I believe the fact that we have watched all episodes demonstrates that we can recommend the series. It is a funny sitcom and it is difficult, almost impossible, to watch it without feeling a certain 90s nostalgia.

In the figure below, I show all of our ratings. As we can see, there is a positive correlation, i.e., we tend to enjoy the same episodes. However, we also see several disagreements. 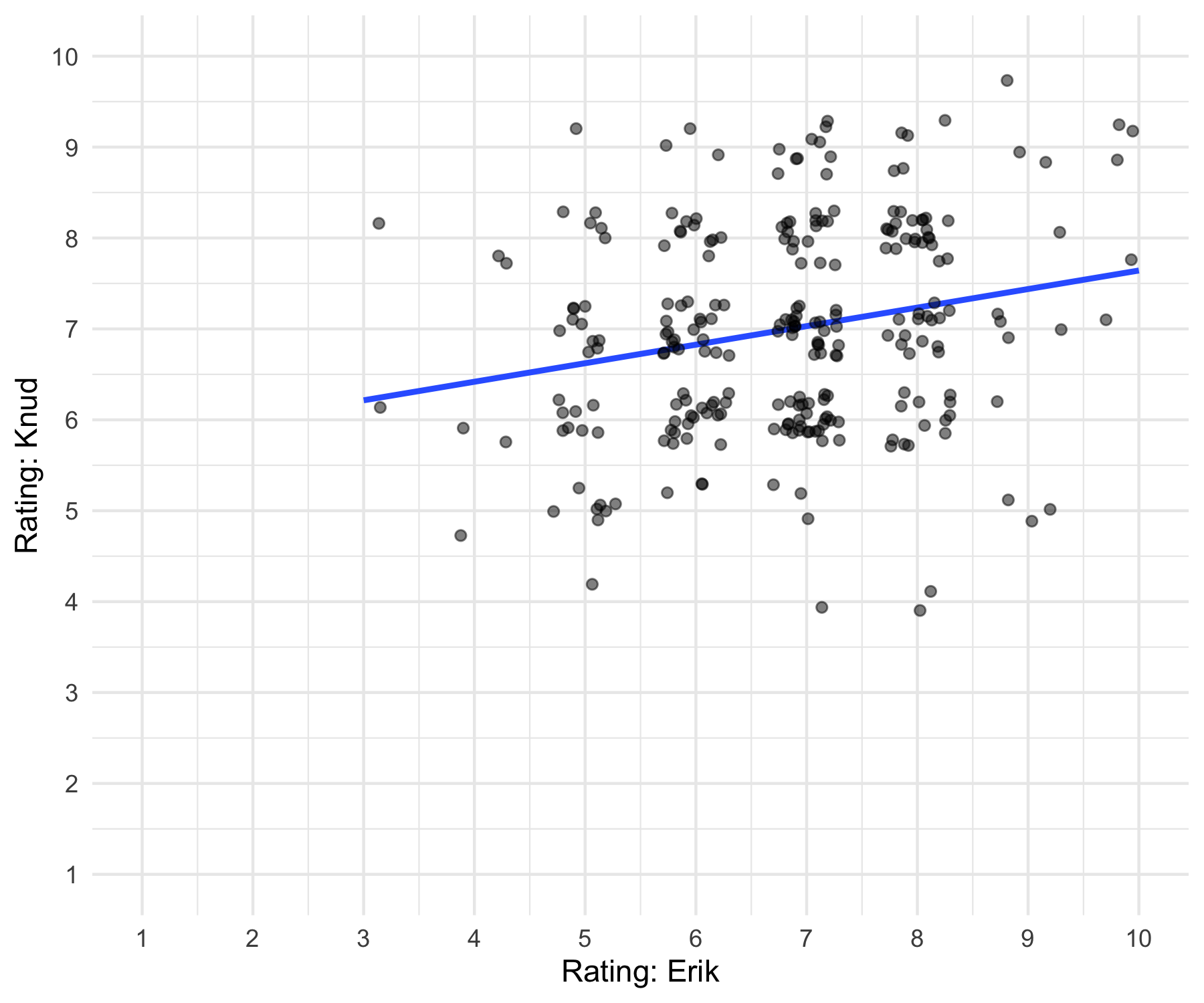 There is a strong correlation between the IMDb rating of the episodes and our ratings (r = .55 for me and r = .51 for Knud). On average, when the users of IMDb like an episode, we tend to like it as well. However, the correlation between our ratings is not as strong. That is, while we tend to agree with the majority of people on IMDb, we do not necessarily agree with each other on what episodes are the best (and worst). One reason for this is that we tend to have more extreme scores than the average rating on IMDb. Or, in other words, there is a lot more variation within our ratings than the average ratings on IMDb.

We agree on a lot of the episodes. For 185 episodes, we are within one star in either direction (e.g., I give a 7 and Knud gives an 8), and for 79 of these episodes we give the exact same rating. There are seven episodes that we both gave either 9 or 10. These episodes are My Coffee with Niles, The Matchmaker, The Two Mrs. Cranes, The Ski Lodge, Shutout in Seattle: Part 2, and Out with Dad. All of these episodes also have great average ratings by the IMDb users.

In sum, Frasier is a great show and I can still recommend watching it. I am confident that I haven’t watched it for the last time. I might even rate all episodes at some point in the future in order to explore the intra-individual variation in my ratings.