The study relies on self-reported, observational data. As this is not a placebo-controlled study that could establish a strong conterfactual group, it is important to examine how exactly the study constructs a treatment group of microdosers and a control group of non-microdosers. In this post, I will show that there are some significant limitations, maybe even problems, with the study design and inferences made in the paper. 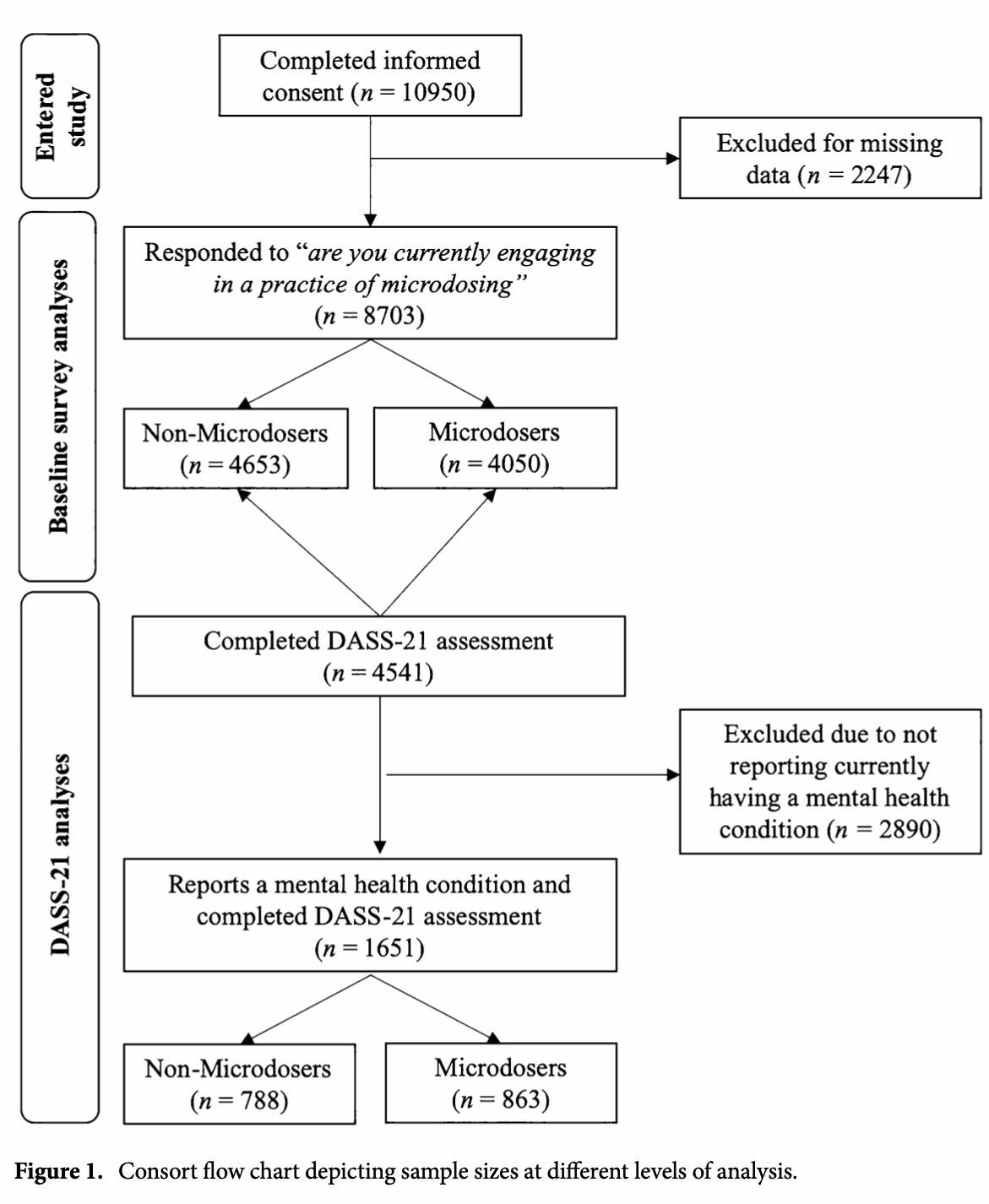 Well, let’s begin from the … beginning. How did people find their way into the study? Is it a random sample? No, on the contrary, people self-selected into the study, so do not assume that any conclusions made in the study will generalize to the population at large (whatever that population might or might not be). According to the webpage of the study, the study was launched on November 15, 2019, on the Joe Rogan Experience podcast. I am quite confident concluding that people not only listening to Joe Rogan, but also deciding to participate in a study on microdosing, are weird (not psychologically WEIRD, but weird-weird). Furthermore, as the authors acknowledge in the paper, only iPhone users could participate in the study (there was no Android app).

The next challenge is identifying who the microdosers are. You can see in the figure that the survey asks “are you currently engaging in a practise of microdosing”, and the relevant word here is “currently“. From what I can tell, the authors did not ask about previous microdosing experience. Why is that important? When the control group, i.e., non-microdosers, will include those who have never microdosed and those with a history of microdosing, we are introducing a bias. For example, it might be that those who are no longer microdosing had negative experiences with microdosing and, for that reason, worse mental health. This makes it very difficult to substantiate that any differences between the two groups can be attributed to the, for example, positive effect of microdosing in the treatment group (and not a negative effect of microdosing in the control group).

Unsurprisingly, we see that there are significant diffences between the two groups in terms of who are microdosers and non-microdosers. Table 1, shown below, shows that microdosers tend be older (highlighted with yellow and green) and more likely to live in urban community settings (highlighted with blue and pink). Is that something that is taken into account in any of the statistical models? Alas, no. None of the models even attempt to adjust for any of these covariates. It’s hip to chi-square. 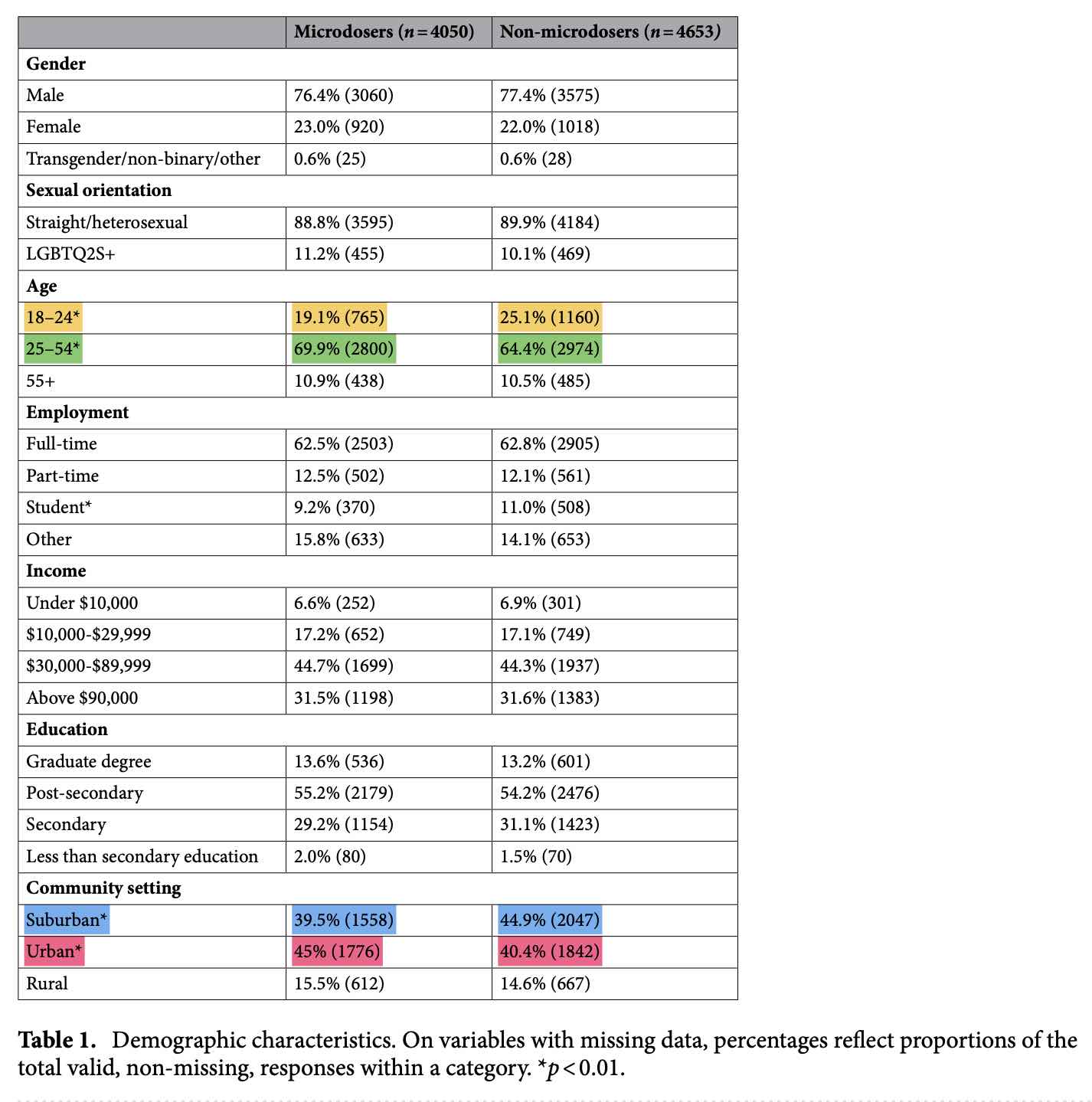 In Table 2 in the paper, shown below, we see that microdosers are less likely to use alcohol frequently and more likely to abstain from tobacco (though more likely to use cannabis more frequently). How can we say that any differences between the two groups can be attributed to microdosing psychedelics and not, say, smoking cannabis? Or not drinking alcohol? We can’t. 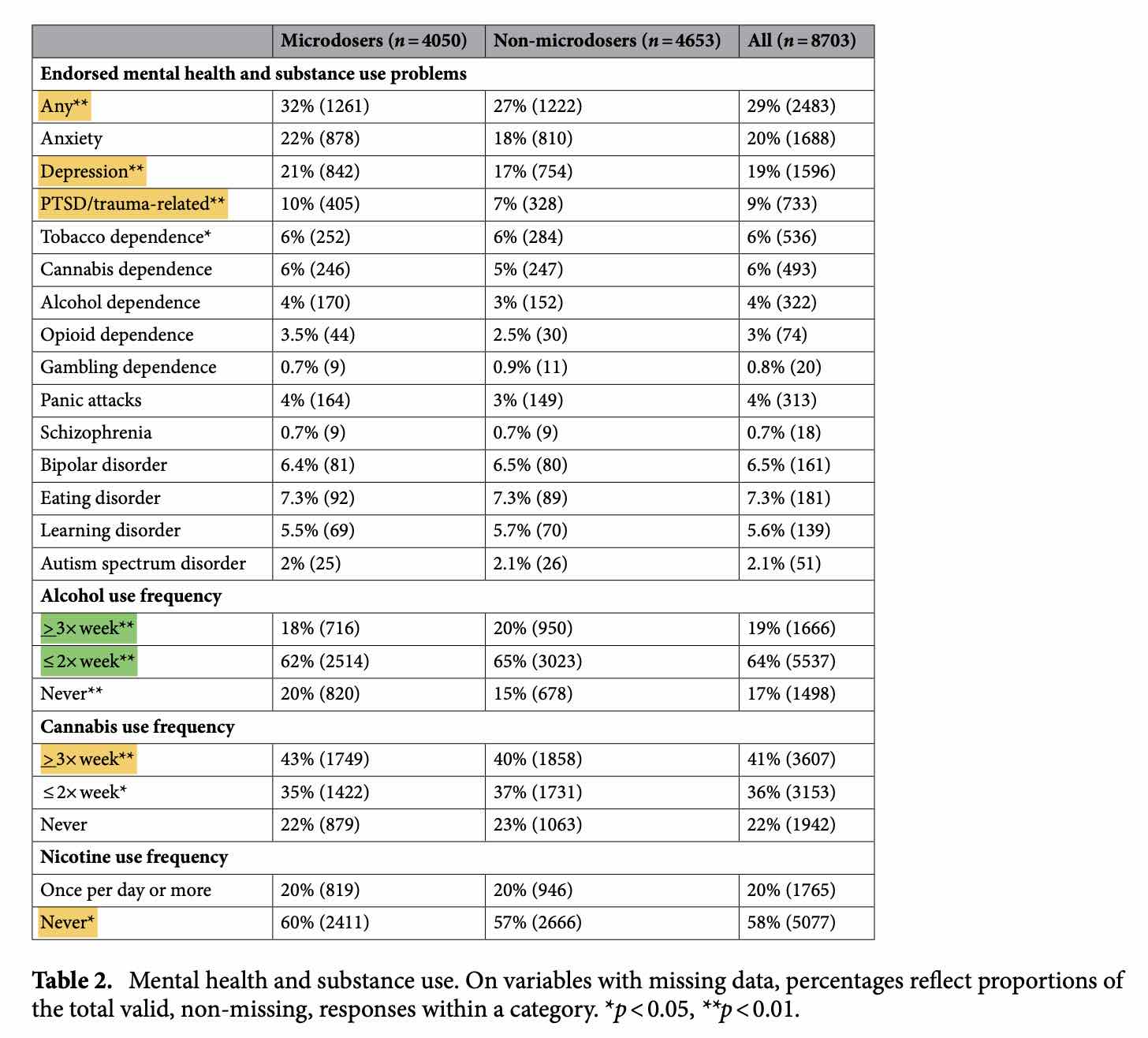 Well, this is interesting. The study is about the positive impact of microdosing on mental health. Notice this part from the paper: “Microdosers were generally similar to non‐microdosing controls with regard to demographics, but were more likely to report a history of mental health concerns. Among individuals reporting mental health concerns, microdosers exhibited lower levels of depression, anxiety, and stress across gender.” How can the difference between the two groups suddently change sign from negative to positive?

The key findings are reported in Figure 2 in the paper: 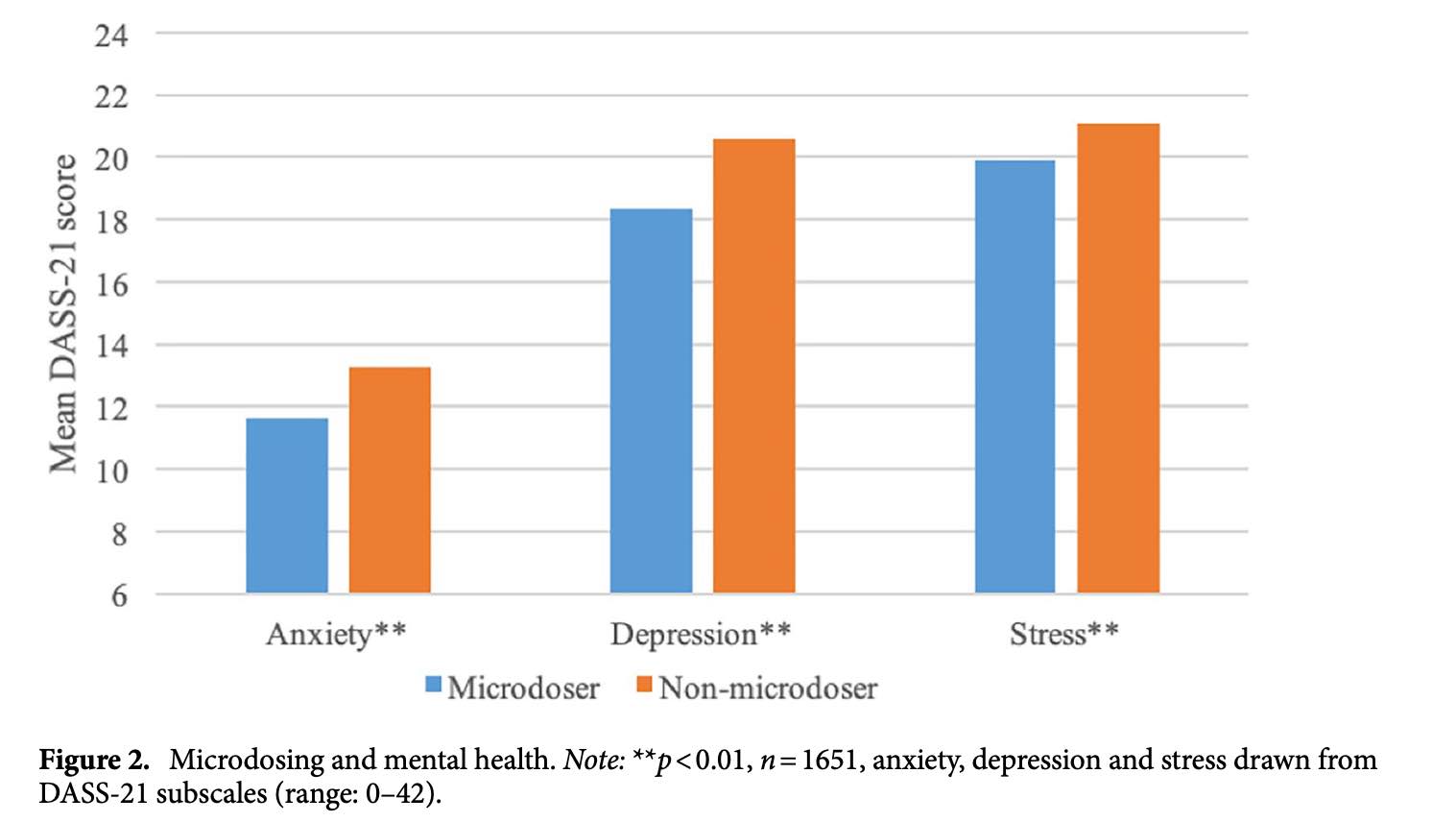 Here we see a negative “effect” of microdosing psychedelics on anxiety, depression and stress. Again, we are conditioning on a collider so don’t put too much into the results. Actually, ignore them altogether. However, even if we assume that these results were valid, we can add a few points. First, notice how the figure uses the y-axis to mislead. Second, and related, the “effect” sizes are negligible. Maybe that is why it is called microdosing.

Noteworthy, I have not looked at the raw data so I cannot rule out that I have identified all relevant issues with the empirics. The data availability statement of the paper says: “All data generated during and/or analyzed during the current study are available from the corresponding author on reasonable request.” I reached out to the corresponding author and asked for the replication material. Specifically, I said: “I have a few ideas for robustness tests I would like to explore to better understand the findings, and I am wondering whether you can share the replication data. I can confirm that I will not share the data with anybody else. I hope this constitutes a reasonable request.” The researchers were kind enough to let me know that they are still ‘preparing the data for public release’, but at the time of me writing this post, I cannot analyse the data. I will of course write a follow-up post when the data is available if – and only if – there is anything of interest to say.

I always assume that researchers care about testing a hypothesis rather than looking for support for a hypothesis. However, in the specific case I am doubtful that the researchers have put the theory to a fair test. Why? Take a look at the (depressingly long) competing interests statement in the paper:

We have both a theoretical bias (these researchers are being paid to support the medical development of psychedelics) and a methodological bias (using and showing the validity of a specific data collection platform). The competing interests statement in the paper can easily explain why and how the researchers can end up showing a negative correlation between microdosing psychedelics and anxiety, depresion and stress, even when the raw data shows positive correlations.

Will microdosing psychedelics have an impact on your mental health? If so, is it positive? Or negative? We cannot use any of the findings in the paper to answer these (relevant) questions. Hopefully future research can help us out here.