I finally got to read The Little Book of Hygge: The Danish Way to Live Well, written by Meik Wiking. It’s actually a fine book and if you are moving to Denmark, I would definitely recommend picking it up (it’s an easy read). There is a lot of things that are good to know about Danish culture before you get first-hand experience with it.

The question we can use to measure how happy people are in the European Social Survey is ‘Taking all things together, how happy would you say you are?’, which is measured on an 11-point scale from 0 to 10 with 0 being ‘Extremely unhappy’ and 10 being ‘Extremely happy’. Using this data, I can confirm that Danes are indeed the happiest people in Europe. On average, respondents in Denmark are more likely to report that they are happy.

For each country and round of the European Social Survey, I calculated a (weighted) average of how happy the people in the survey is within each country and year of the survey. This gives us 223 estimates (i.e., one for each sample). Noteworthy, not all countries are included in all rounds of the European Social Survey. The figure below shows the distribution of estimates with the estimates from Denmark in blue (to show how they are in the top of the scale).

The one estimate that is better than most of the Danish estimates is Iceland in 2004. Of the 223 estimates, 7 out of the 8 estimates from Denmark are in the top 10. Five countries, namely Iceland, Denmark, Switzerland, Norway, and Finland, fill up the top 30 estimates.

In the figure below I take these five countries and Sweden to show how they rank over the years (with the country at the top being number one). Here you can see how Denmark has been number 1 in all years but 2004 (where Iceland had the greatest average level of happiness) and 2016 (where there is no data from Denmark). 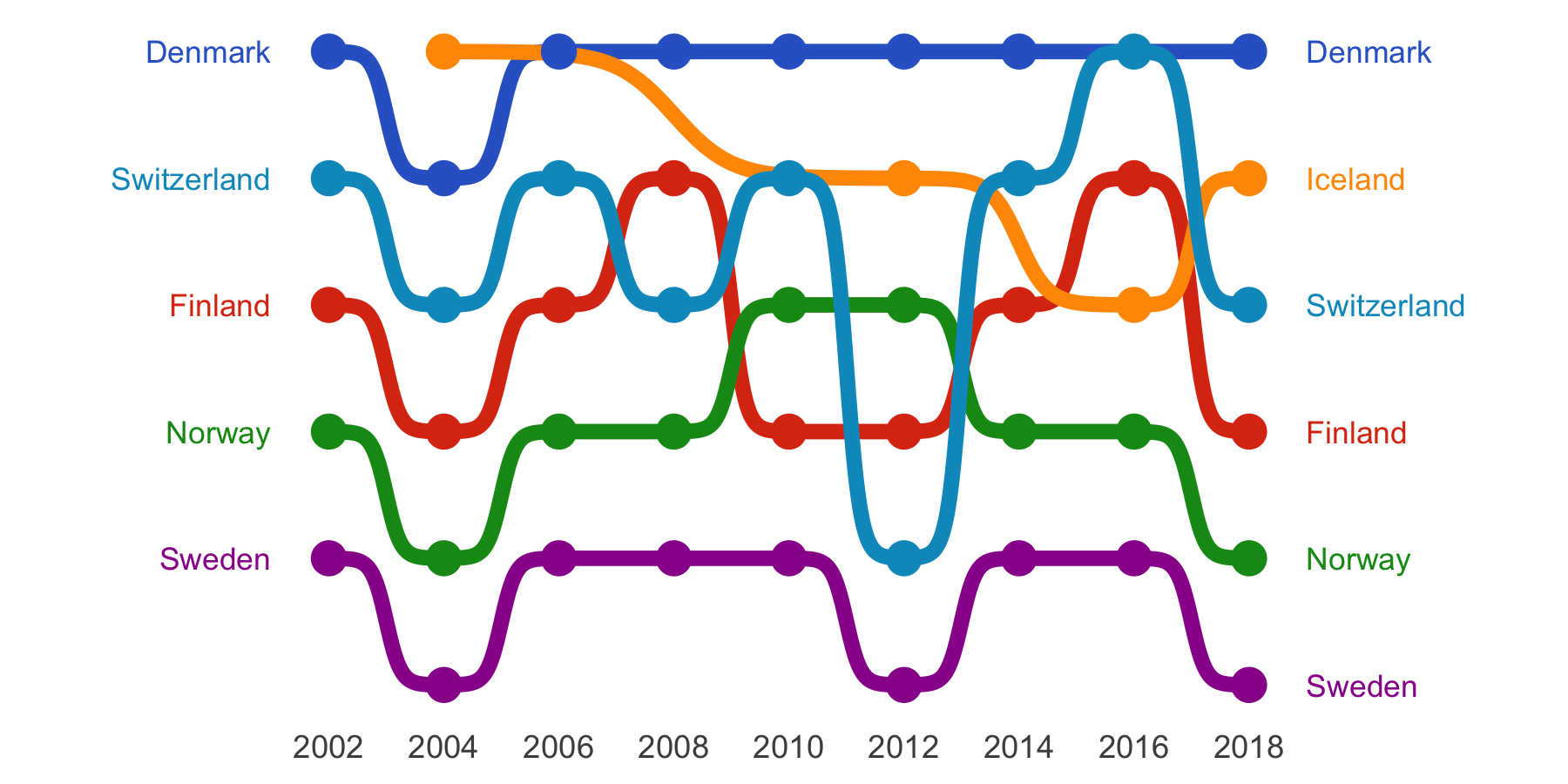 We see a few things here in addition to the fact that Denmark is in top. First, Swedes are consistently less happy, on average, than people in the other five countries. Second, there is quite a lot of variation in the ranking of Switzerland over time (from number 5 in 2012 to number 1 in 2016).

In sum, Danes are indeed – at least when asked in the European Social Survey – quite happy.