There is an increasing focus on interpreting the practical significance of effects in the social sciences (Bernardi et al. 2017; Gross 2015). A p-value is rarely, if ever, sufficient to examine the validity of a hypothesis of interest. While a large sample can ensure sufficient statistical power, it will also, all else equal, increase the chances of finding statistical significance when effect sizes are small. Importantly, a large sample size or a small p-value is of little informative value without knowledge of the actual magnitude of an effect. Similarly, we cannot necessarily conclude that a p-value of .06 is weaker evidence for a hypothesis than a p-value of .04. Nonetheless, many studies rely heavily on the .05 significance level to validate their findings.

Specific approaches have suggested to assess the practical significance of a result in political science. Rainey (2014), for example, suggests that researchers use 90% confidence intervals to argue for a negligible effect. Gross (2015) suggests null hypothesis significance testing alongside an assessment of what parameter values should be considered to have real-word implications. While these studies provide sensible advice and illustrate that political scientists have tools at their disposal to examine the magnitude of effects beyond statistical significance, limited attention has been devoted to the actual distribution of effect sizes in the literature.

In political science, as in related fields, the strength of an empirically identified relationship is often estimated with the Pearson correlation coefficient. While researchers can rely on and interpret such correlation coefficients, there is no empirical guidance on when such correlations are small and large. Instead, researchers often interpret such effects in isolation, or even worse, provide no interpretation of the effect size at all.

Lovakov and Agadullina (2021) studied 12,170 correlation coefficients and find that 0.12, 0.24, and 0.41 are small, medium and large effects. Funder and Ozer (2019) found that larger effect sizes (i.e., greater than .40) are unlikely in psychological research and possibly indicate an overestimation. Unfortunately, similar attention has not been paid to the issue in political science.

To shed light on the effect sizes in the political science literature, I collected some data on effect size estimates available in meta-analyses in fields related to political science. The meta-analysis is one of the tools political scientists rely on to systematically assess a set of empirical findings (Dacombe 2018). The advantage of the meta-analysis relative to other types of reviews is that it provides quantitative information on the effect sizes within a body of research, commonly in the form of Cohen’s d or Pearson’s r. The information provided by both enables analysis across different domains, including assessments of whether effects are small or large. 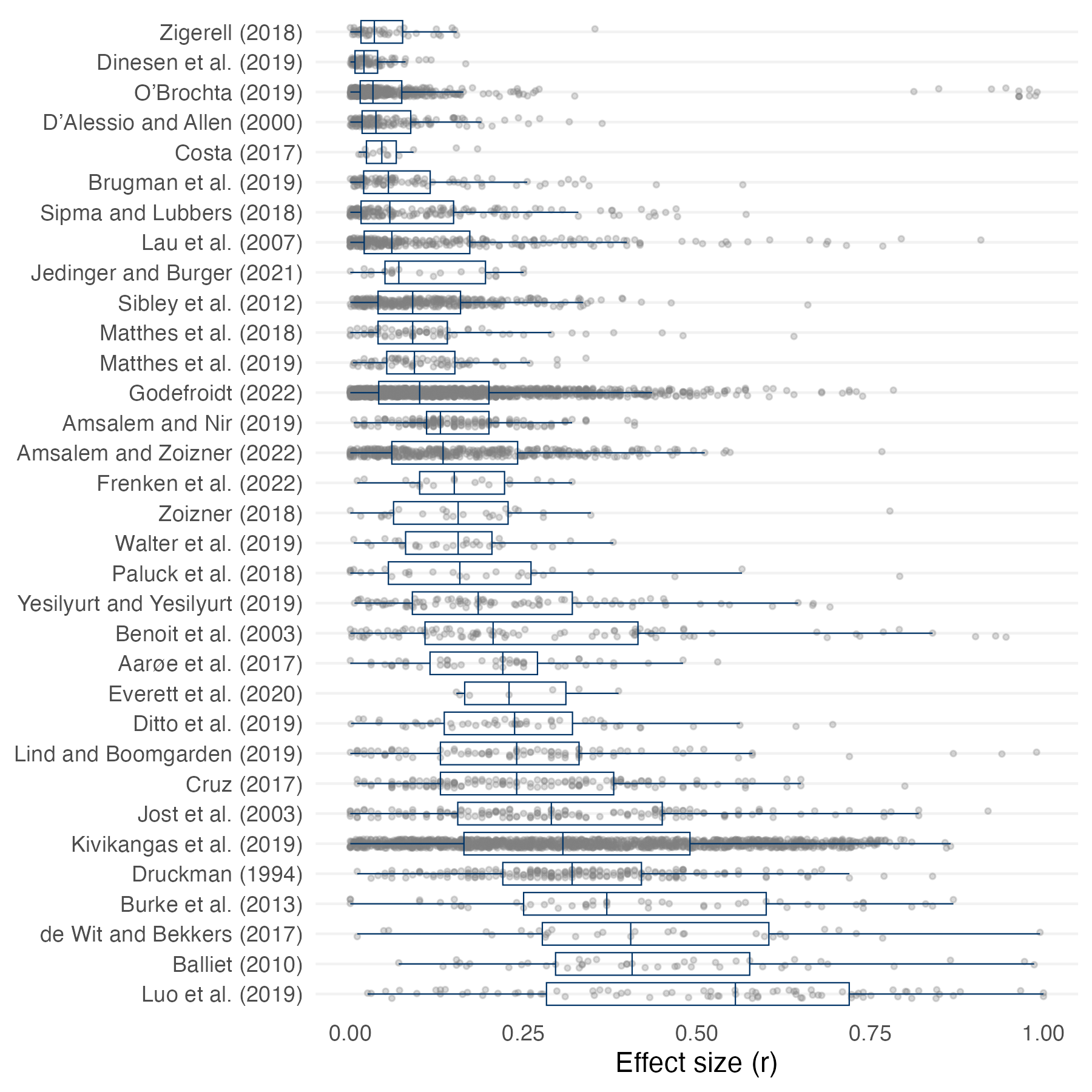 Do we have sufficient data to estimate effect sizes of interest to make confident conclusions about political phenomena? Traditionally, the heuristic of interest has been that of statistical significance, i.e., whether an effect has a p-value that is statistically significant at a level that warrants an asterisk in a regression table, often at the .05 level. Focusing on effect sizes highlights the importance of sample size in relation to publication bias. For example, Gerber et al. (2001) use publications on the effectiveness of political campaigns to show a strong negative relationship between sample size and effect size. Interestingly, only 9.7% of the effect sizes in the dataset explored here have sufficient statistical power to identify a small effect. This small number is consistent with a similar recent study by Arel-Bundock et al. (2022). Similarly, a power analysis of RDD studies found that most studies were underpowered (Stommes et al. 2021).

In sum, in line with results from psychology, studies are often underpowered and effect sizes are, on average, small in magnitude. The recommendation here is that political science researchers should plan for small effects when designing studies and, all else equal, consider correlations of .05, .15 and .30, as small, medium and large effects, respectively.