A new study argues that Donald Trump’s 2020 electoral defeat had a sizeable negative effect on expressed support for the far-right party VOX in Spain. Here is what the study shows:

Empirically, we demonstrate that the (naturally occurring) treatment assignment afforded by the quasi-experimental setting in Spain led to a significant fall in self-reported voting intentions for the Spanish populist radical right-wing party, VOX. Those respondents interviewed immediately after the US election result was announced were between 3 and 6 percentage-points less likely to support VOX when compared to those interviewed immediately before.

It is an interesting idea and we have seen a lot of papers puslished over the recent years studying the impact of an event taking place in the middle of the data collection of a survey (I have even published a few papers using said strategy). A recent article in Political Analysis, titled Unexpected Event during Survey Design: Promise and Pitfalls for Causal Inference, presents the strenghts and limitations of this identification strategy to study the causal impact of specific events.

One concern I have with several studies, the above-mentioned study included, is that they are not really studying unexpected events. Instead, if anything, they are studying an unexpected outcome of an event. There is a significant difference between studying the impact of an election (that is never taking place unanounced) and, say, a terrorist attack (that is rarely announced days in advance). We cannot assume that this distinction is inconsequential when making causal inferences.

On Election Day, the probability of Trump winning was one in ten. I find it reasonable to say that this event, i.e., Trump’s defeat, was expected rather than unexpected. This is not to say that Trump’s defeat was unexpected for all voters, especially right-wing voters with little to no confidence in opinion polls. However, we are not necessarily working with a strong empirical case to examine electoral contagion. For example, the 2016 US presidential election is a much better example of an unexpected outcome of an event.

In addition, the probability of Trump winning was even lower in the days following the election. This is relevant here when we consider the exact treatment assignment. Respondents in the survey were split into two groups; those interviewed before November 7th and those interviewed on or after November 7th. That is, we are only looking at people interviewed after Election Day, but prior to the election being officially called. My argument here is that the probability of a Trump win was close to zero percent following Election Day (i.e., both for untreated and treated respondents).

For that reason alone, I am not convinced that this setup is the best possible way to examine how Trump’s defeat had implications for European politics. However, if people are between 3 and 6 percentage-points less likely to support VOX following the election, I would expect to also see this pattern in the opinion polls conducted in Spain before and after the election.

Here is a figure with all opinion polls for the national election in Spain 30 days prior to and 30 days following November 7th, 2020. The vertical dotted line indicates November 7th. 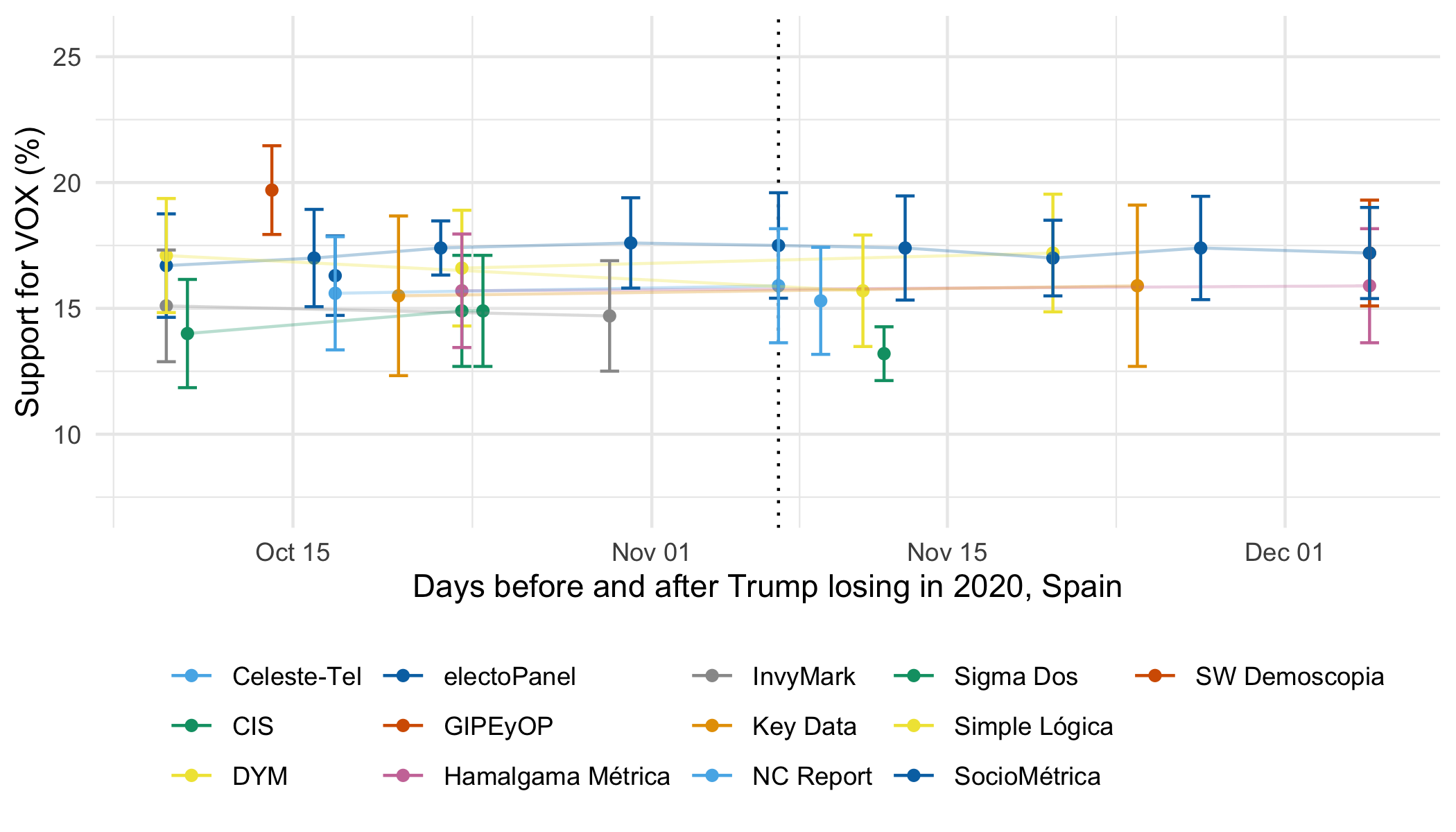 There is no evidence, or one example in the polls, of VOX losing 3-6 %-points following Trump’s defeat. If anything, the support for VOX is very stable in the period. This made me look further into the descriptive statistics of the paper. In the Online Appendix, we can see that the average support for VOX in the full sample is 6%. This is not even remotely close to where the party was in the polls at the time. I am not sure this can be explained by sample composition/weights, but even if that is the case, it should raise significant concerns about the population average treatment effect.

It might be that the sample is not representative, but it might also be that there are issues related to differential non-response, and especially something that might kick in following the US Presidential Election. Accordingly, even if there is a strong “effect” of Trump’s defeat in the sample being studied, I am not convinced this can be attributed to people being less likely to vote for VOX, especially when considering what the opinion polls show in the period.

This is not to say that I find it implausible to believe in Donald Trump’s defeat and electoral contagion in Spain. However, while I believe the study in question is well-executed (which is one of the reasons I find it relevant to write about here), I would like to see additional work on this mechanism. One potential solution could be to look at other datasets that were in the field in this period, which might enable a test of the argument as well (and including European far-right parties beyond VOX in Spain).