There is no doubt that ‘The Godfather of TV’, The Sopranos, had a tremendous impact on several drama shows, especially those with an antihero protagonist. It is one of the best TV shows ever made, and definitely the epitome of cinematic TV.

I watched all episodes of The Sopranos for the first time circa 2011. I am not necessarily a great fan of the American Mafia genre although I do like The Godfather (especially the TV re-edit of the first two movies), 90’s Scorsese and the Mafia II video game. The great thing about The Sopranos, however, is that you come for the mafia (action) and stay for the family (drama).

I decided to watch the show again this year and I liked it a lot more upon my second viewing of all episodes (with a few exceptions). I read The Sopranos Sessions in parallel (a great book with a lot of anecdotes and interpretations) and listened to a few podcasts on the show, including The Sopranos Show and the Danish podcast The Sopranos – Verdens bedste TV-serie. I can recommend the book but I never really got into any of the podcasts.

Another recent book I enjoyed reading while watching the show is Best. Movie. Year. Ever.: How 1999 Blew Up the Big Screen by Brian Raftery. The book is about all the good movies that came out in 1999 (Fight Club, American Beauty, Being John Malkovich, The Matrix, Magnolia, etc. — though it does not mention one of my personal favourites from that year, The Ninth Gate). This book is interesting in this context as it also deals with the fact that The Sopranos premiered in 1999.

I know that a lot people enjoy the earlier seasons more, but I believe that the quality is relatively stable over time. In Figure 1, I have plotted my IMDb ratings of the individual episodes (and highlighted the titles of the episodes I rated 10 or below 6).

Figure 1: My IMDb ratings of all episodes of The Sopranos 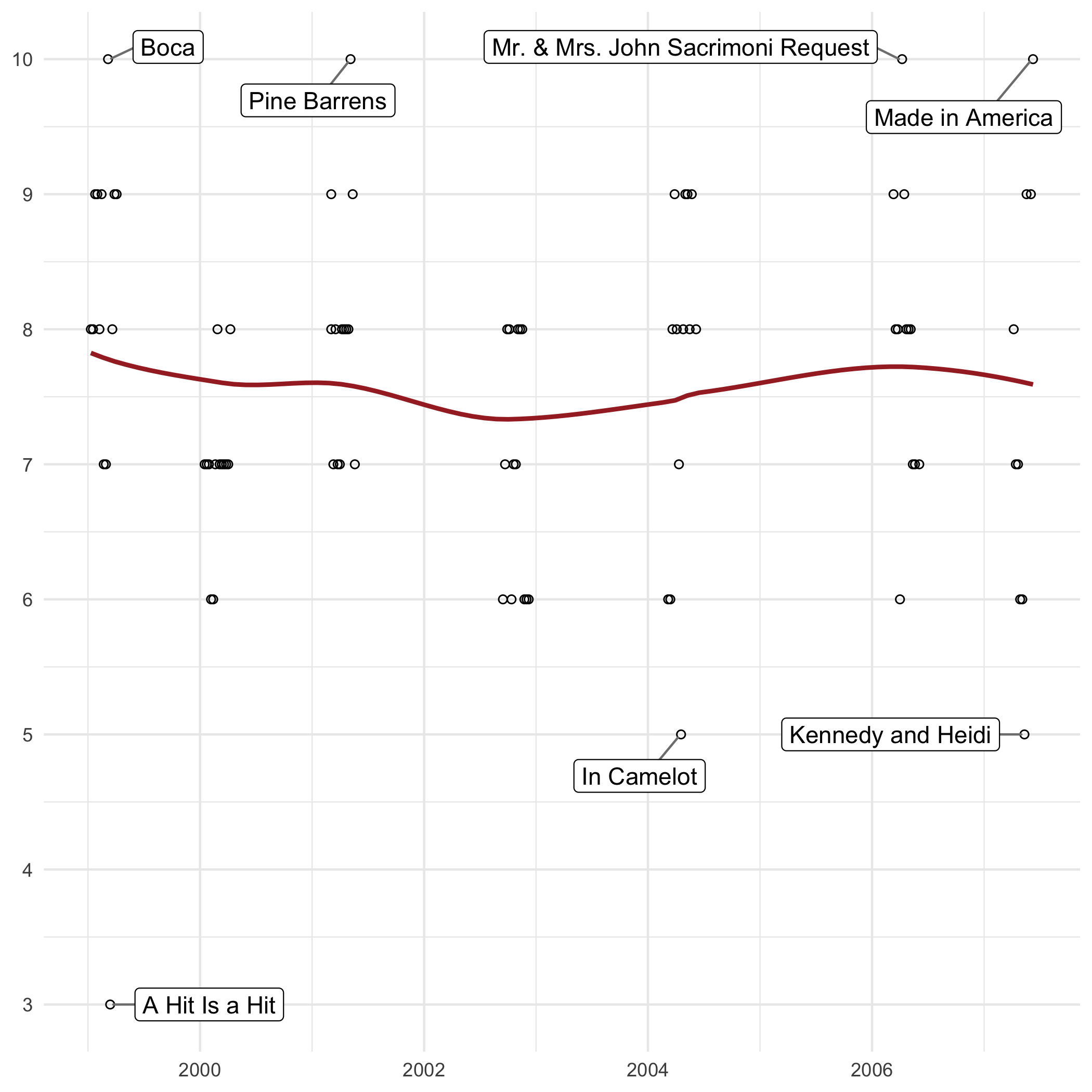 The interesting thing about The Sopranos is that the overall rating of the show is not the average rating of all episodes. Accordingly, what is great about The Sopranis is the universe that is established over time – not the individual storylines in each episode. The Sopranos is, in other words, greater than the sum of its parts.

Also, as you will notice above, I gave the last episode a 10 out of 10. I fully understand why a lot of people don’t like it, but it is such a defining part of the show and it is difficult to imagine any other meaningful ending at this point.

What I remember from my first viewing was the power of individual scenes (especially those with a certain shock value). I did not remember any episodes as standing out in terms of being weak. However, I now notice that there are certain boring storylines in the show. My least favourite episode is “A Hit Is a Hit”, and in general I am not a great fan of the storylines where Christopher is, directly or indirectly, working on a career with books, music, theatre or movies.

A show like Frasier is all about comedy (and very little drama), In Treatment is all about drama (and very little comedy), and Hannibal is lacking on both dimensions. (You can create a 2×2 table where The Sopranos is in the upper-right corner working on both dimensions.) An episode like “Pine Barrens” is the best example of this perfect balance between comedy and drama.

Related to this, Bryan Caplan provides some interesting reflections on the show, such as: “If you neutrally described the typical Sopranos episode, almost anyone hypothetical juror would hand down centuries of jail time. As you watch, however, righteous verdicts are far from your mind. Why? Because the criminals have amusing personalities. […] How can we feel such affection for a sadistic killer like Paulie? Because he’s hilarious, and we’re in no danger. Oh, and how he loves his mother!”

In sum, if you got a lot of hours to fill out during the holidays, do devote some family time to David Chase’s chef-d’œuvre.